My very first Santacon. I had been working Monday – Thursday and therefore had to run around on Friday, the day before Santacon, to look for a Santa costume. I wanted to find something incredibly cheap, but as I grew more desperate I finally settled for a so called “luxury santa suit” for £16. My only other option would have been “female Santa suit” which obviously is a skimpy red dress and a hat, because I didn’t have time to find an other fancy dress shop. Anyhow, it turned out to be absolute shit. The label on the outside featured a costume made from velour, but the actual suit was made from 100 % polyester. The seams broke in the crotch area the first time I tried it on! I think the most baffling thing is that it was 50 % off and would originally have cost £ 32. I decided to skip the trousers and wear a red dress underneath the coat, which was a really good idea. The result was embarrassingly amateurish compared to some of the costumes at Santacon, but it was good enough that some Chinese tourists asked to take a photo with me and told me I was a pretty Santa. Judge for yourself. I’m not sure if the guy in the background is photobombing me or whether he just looked like that by accident? 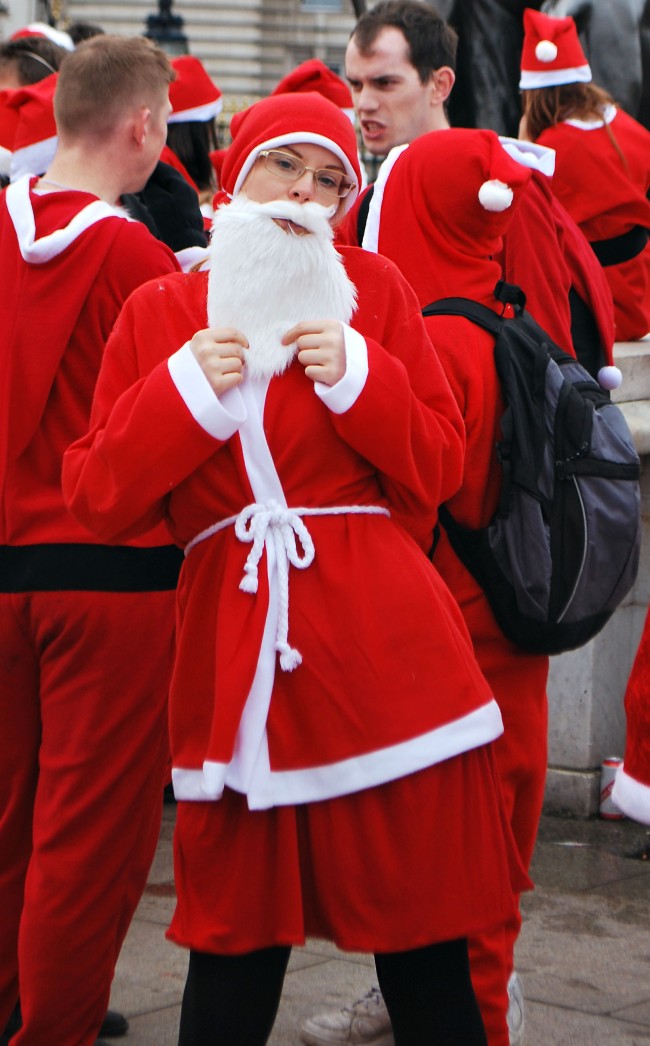 I hadn’t realized that so many people would turn up in very well thought-out costumes that they probably had spent hours or days putting together, like the transformer Santas. I didn’t get a chance to photograph all of them, but here are some of my favorites that I managed to take a picture of:

Guy who looks like he was born to be a Santa: 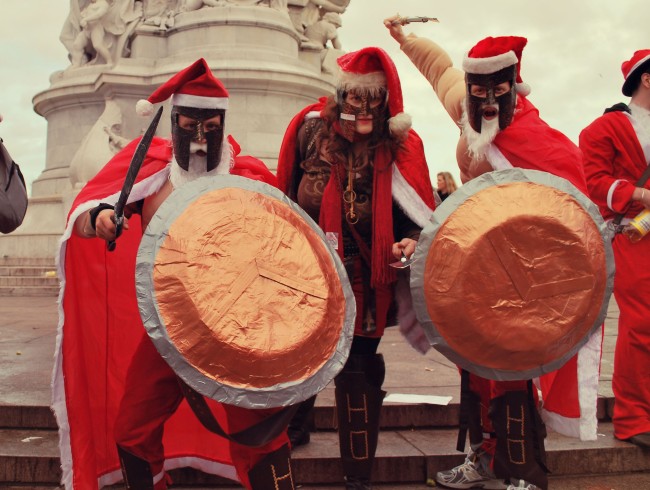 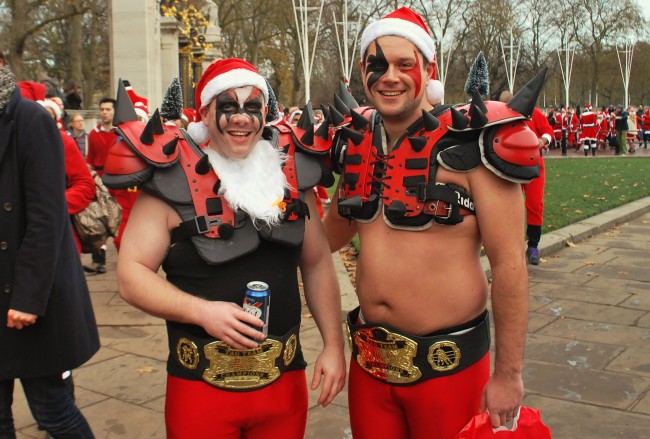 I think my least favorite ones were the people who turned up in morph suits! I commented to my boyfriend that coincidentally all the men in the morph suits seemed less endowed than the norm. He said that, in all fairness, it was pretty cold outside. Once again photobombed by the guy on the right in this picture: 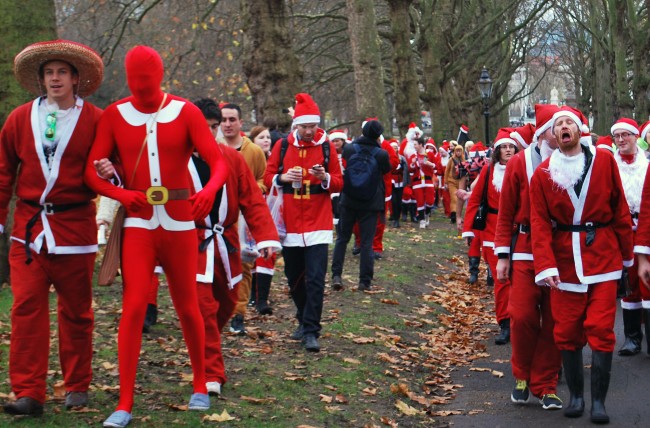 I had a good time though, and I think Santacon London is probably a lot different from Santacon NY. In the end it’s just a big themed party that takes place on the street, and of course you’re going to get some bad seeds as well as good ones, but the event as a whole was pretty well-organized in my opinion and I would definitely go again another year. 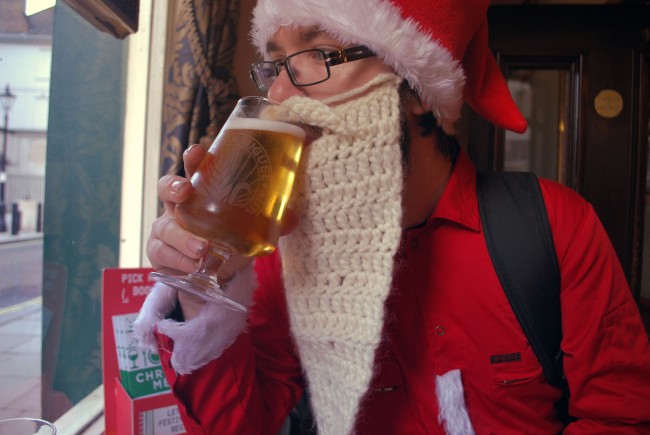 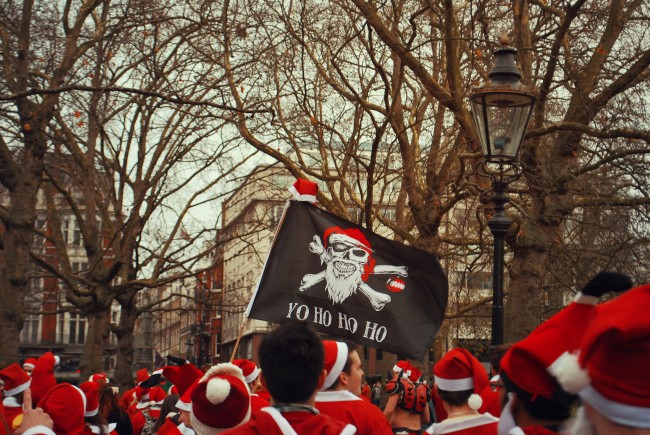 You can’t see very well in this photo, but a couple that were getting married/getting their wedding photo taken, got surrounded and cheered on by Santas. 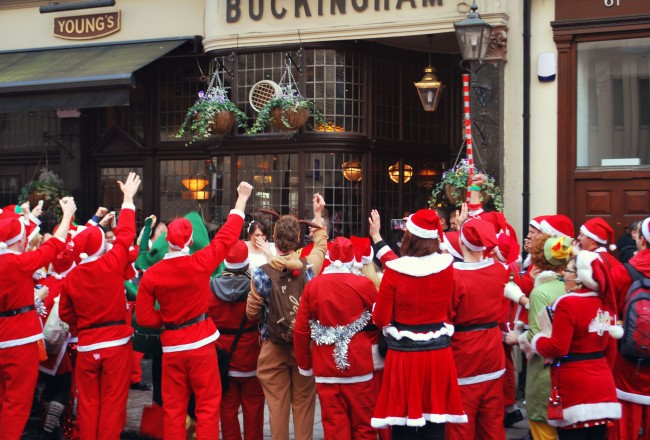 They took off their hats and waved to us! 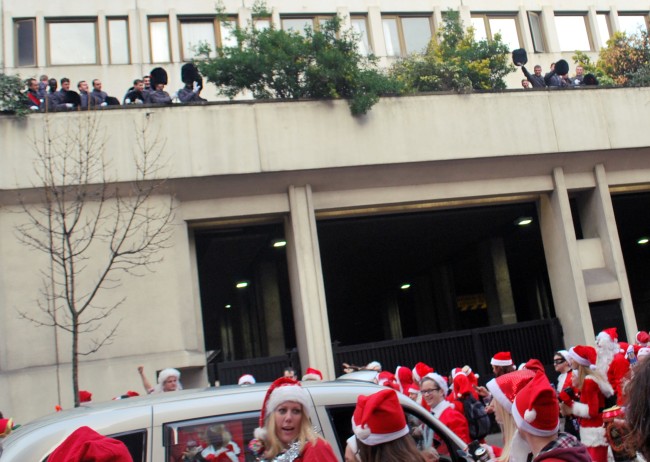