Dreams and other fucked up things the brain does

I know everyone hates hearing about other people’s dreams, but dreams as a phenomenon is freaking interesting! No one knows quite why we dream, but of course there is a lot of theories. Some say that dreaming is the brain’s way of filtering the events and thoughts of the day, which makes sense until you consider that dream you had about your primary school teacher that you haven’t thought of in years yelling at you for crocheting obscene art.

And why do some people dream so much more than others? I dream every night and I remember my dreams when I wake up. My boyfriend rarely dreams at all, and when he does he wakes up screaming because he dreams of bees. I think I’ve always been fascinated with dreams. When I was a kid I would sneak in to my younger sister’s room and whisper random things into her ear to see if she would dream about them. In general, I feel like she was the subject of most of my psychological experiments as a child. That’s what older siblings are for, I guess. 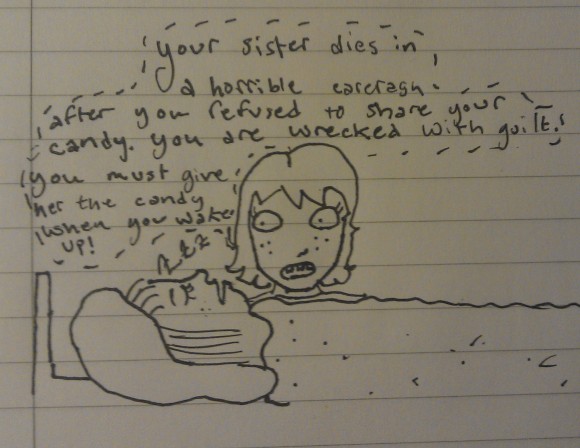 Dreams are also interesting when you consider what the brain actually does when dreaming,- it pretty much shuts down both your ability to think logically and be self-aware. I’m sure everyone has experienced dream logic at some point, but brain scans has actually shown that the prefrontal lobe is more or less deactivated when dreaming. Some people claim to be able to become self-aware and presumably capable of logical reasoning while dreaming, which is called lucid dreaming. The point of lucid dreaming is being aware that you are in fact dreaming and being able to manipulate the dream. I tried to master it when I was younger (there’s a lot of online instructions on how to do it) but it only worked for a short period of time.

Another interesting (and sometimes horrifying) thing is how our bodies become paralyzed when sleeping to prevent us from hurting ourselves (or others) by acting out the movements that our dreamself is doing. For some people, the brain shuts down body control too early or turns it on too late, the so called “sleep paralysis” , when you realize you are awake and can’t move. Others, like my mum, seem to lack this function entirely and ends up doing a ton of stupid things while asleep, like rearranging the furniture. I think the most terrifying story of sleep walking that I’ve heard was about a friend of a friend who woke up to discover all of his kitchen knives laid out neatly on the kitchen table. Luckily nothing happened, but it really makes you think about what could happen.

Anyhow, so why can’t we read in dreams? Things like reading a text and looking at a clock are often hard to do in dreams, but there isn’t a solid explanation as to why. Some people also experience that the palms of their hands are messed up when dreaming, but that has never happened to me. One theory is that some part of the brain that is involved in reading text or the sense of time is deactivated during sleep.